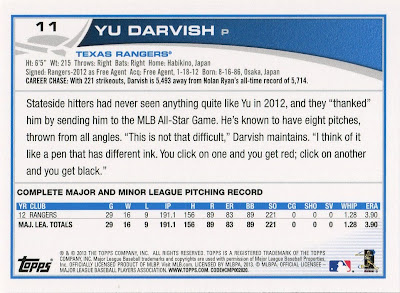 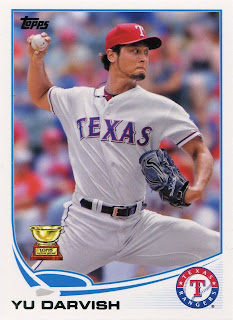 True to his word, Matt from over at Once a Cub offered me his Opening Day extras from the debacle that was Blaster Wars. I turned him down though as I plan to buy a complete set in the near future and figured he would be able to trade them off for other stuff. With that said, I did take him up on his offer to let me scan a few for the purposes of this blog. 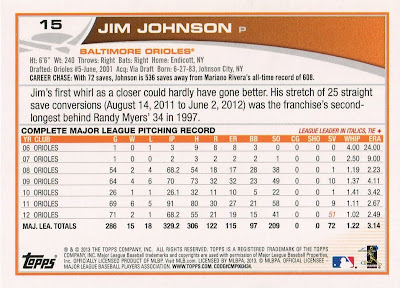 The Orioles have yet to play so in honor of their Opening Day today, here is Jim Johnson's card from this year's set.


I don't really follow American League baseball so it could just be me,  but the Orioles kind of came out of nowhere last year. And a big part of that was closer Jim Johnson. His 51 Saves, was three more than the next the closest guy, division rival the Rays' Fernado Rodney and nine more than the nearest National League leaders, the Cardinals' Jason Matte and the Braves Craig Kimbrel.
That was enough to garner him a few Cy Young votes in an otherwise tight race between starters Justin Verlander and winner David Price. He also pitched a perfect inning in his All-Star Game debut against a dominant National League team that pounded other American League pitchers for an 8-0 victory. 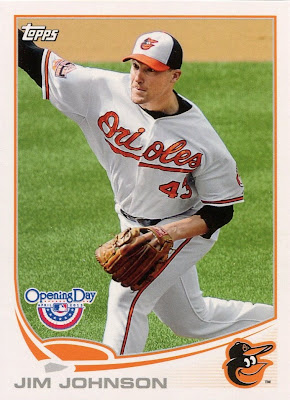 I don't like to harp on the bad stuff, but unfortunately for Doyle Alexander, Topps includes Losses as a statistic on the back of their cards. This card came as a little bit of a surprise to me not because the Tigers were particularly bad that year. (They were, 103 Losses as a team.)

More so because, the previous season, Alexander earned his first and only All-Star appearance and had previously been a Cy Young candidate. He wasn't even the guy that got picked because every team had to be represented because Alan Trammell made it too. But as the saying goes, past performance does not guarantee future results. The Tigers went from 14 games over .500 in 1988 to 44 games under .500.

Alexander was credited with 18 of those Losses. 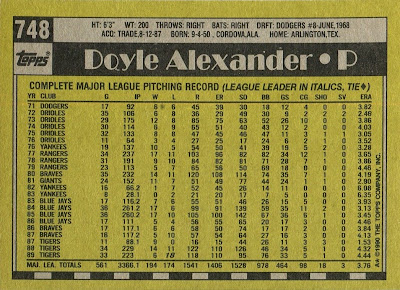 The burden may have been too much for Alexander to bear as that was his final season. 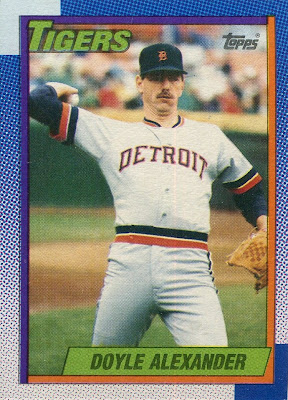 I'm not really surprised that Derek Jeter was a league leader last year. What I was a little taken aback by was that he has been a league leader so few times in his Hall of Fame career. But I guess if your strong categories are At Bats and Hits, its tough to be in the same league as Ichiro for the past 10+ years. 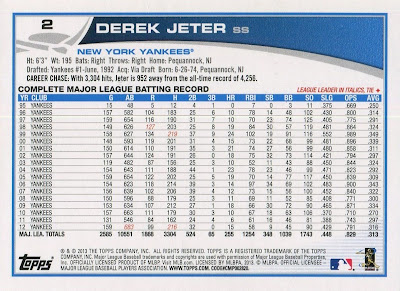 As you can see by the back of the card, this isn't the first time Jeter has been a league leader in hits but it has been a while. And it is the first time he led in At Bats, although a quick glance at his Baseball-Reference page shows he has been in the top 6 ten times in his career and is currently second for career At Bats among active players. The active leader is Omar Vizquel but without a team as of now, Jeter should surpass him this year. Teammate Alex Rodriguez is a pretty distant 889 At Bats behind in third place. Though Jeter is 35 At Bats behind Vizquel, he is 427 Hits ahead of him on the career Hits list, good for tops among active players and 11th All-Time.

Of all the Career Chase notes I've seen on the backs of Topps cards this year, Jeter breaking Pete Rose's all-time Hits record seems the most doable. He'll need to play another 5-6 at the same rate he's played the past 5-6 to do that though and who knows how his body will react as he gets closer to age 40. 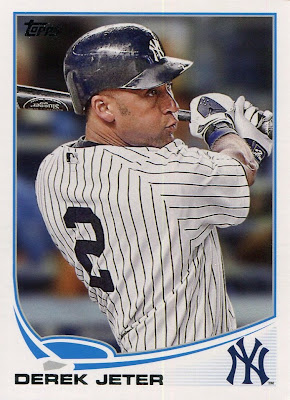 For most players from this time, more often than not, their 1989 Topps card is the one I most associate with a player. And Dennis Eckersley's card is no exception. At this point, he'd made a pretty decent run with is career.
He was a two-time All-Star, finished in the top 7 for the Cy Young award twice and was a 20-game winner with the Red Sox. According to his Baseball-Reference profile, Eck had led the league in other ratio categories but his 1988 Saves total of 45 was the first of the categories normally recognized by a Topps baseball card.

It was one shy of Dave Righetti's fairly recent MLB record of 46 and as recently as 1982, John Hiller had held the record for 10 years with 38. Granted, just a few years after Eck's 45, Bobby Thigpen would obliterate it with 57, but at the time it was huge, especially for a converted starter. The times, they were a'changing.

Looking into my crystal ball, I see that Eckersley would only lead the league once more in Saves, although he would be in the top 5 six other times. He certainly passes the Hall of Fame sniff test. But after looking closer at his stats, aside from playing on a couple of better teams earning him a few World Series appearances, I'm not sure how he got in before Lee Smith. 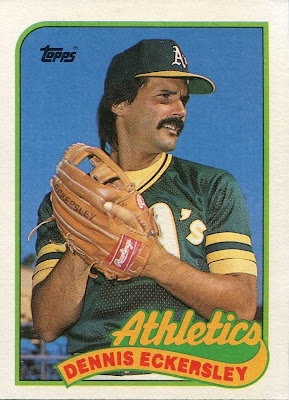 Jose Valverde as a league leader wasn't so much as a surprise to me as the fact that he did it three times with three different team. 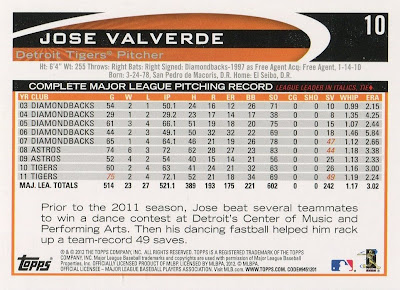 As you can see, Valverde led the National League in Saves in ﻿2007 with 47 as a member of the Arizona Diamondbacks. After being traded to the Astros in the offseason, he followed up with a National League leading 44 Saves in 2008. After two lackluster seasons, Valverde returned to dominance in the American League with 49 Saves and pitching in 75 Games.
And now, he has gone from league leader in multiple categories to free agent with no team near the end of Spring Training. I'm sure he'll find a team soon but it'll tough to forget his epic postseason meltdown from last year. 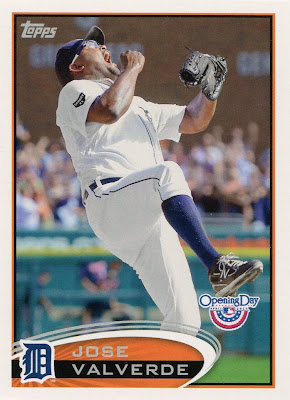 My first post a couple of weeks ago featured Tim Burke of the Expos, who lead the league in Games (for a pitcher) with 78. 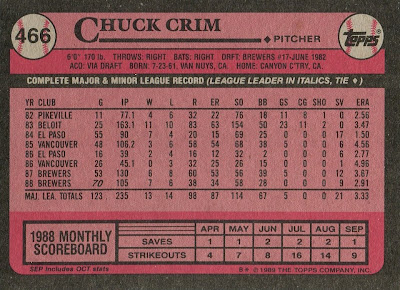 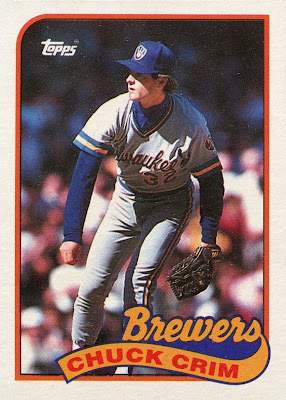